The  staff and researchers at the Fundy Geological Museum are working to produce 3D digital scans of the dinosaur bones still entombed in large blocks of sandstone.

Meanwhile, other Nova Scotia Museum staff are preparing high quality molds and casts of the dinosaur specimens for display during the upcoming dinosaur show in Halifax. These casts ensure the dinosaur fossil can be examined by other scientists and the public without damaging the original that is in museum collections storage.

One of the larger specimens from the prosauropod dinosaur bone bed at the Princeton Quarry is the complete left femur collected in 1997. 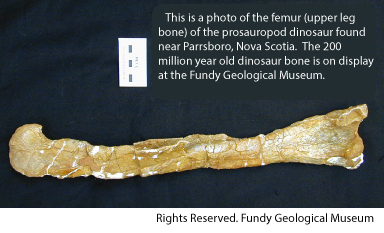 The femur will be used in an upcoming exhibit that will use high resolution casts of the original fossil specimen. The preparation of the museum casts involves expert knowledge and skills. Mold making remains an important skill today.

The first step in creating a high quality reproduction of a the dinosaur femur is to create a mold.

In this case the museum staff are creating a mold based on the “master cast”,  a plaster reproduction made from a previous mold. This new mold will become used to produce a cast for public display, as well as research casts that will be used for museum scientists for hundreds of years.

The mold maker first prepares a supportive base that encases the fossil specimen. This will be the surface of the first side of the mold. The surface includes pour spout and a vent to allow air to escape. The mold maker will pour non-shrinking silicon rubber (Platsil 71-20) onto this surface and encase the bone in a two piece flexible rubber mold.  But before the mold can be made, it needs some walls.

The wall around the prepared fossil specimen is made of clay and held in place with plastic supports. These walls provide the structure that contains the first side of the mold. The mold maker then carefully applies the liquid rubber to the surface of the fossil and fills walls to the required depth.