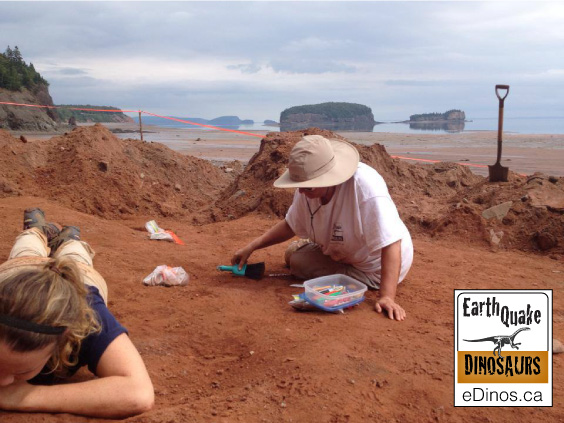 200 Million years ago the super-continent Pangea ripped apart as molten rock flooded to the surface.
Powerful earthquakes fractured the landscape. The Fundy Basin was sinking, and creating 100 meter high cliffs that bordered a deep lowland basin.  In this landscape, shortly after a global mass extinction, several dinosaurs were killed and rapidly buried in sand.

The Earthquake Dinosaurs Program is focused on the study of the dinosaurs and other animals that are preserved in the sandstone rocks along the shores of the Bay of Fundy, including the oldest dinosaur bones in Canada.

Volunteers play an important role in the research program at the Fundy Geological Museum in Parrsboro, Nova Scotia.

Become involved with the Earthquake Dinosaurs Program at the Fundy Geological Museum.

Contact Us and we will provide information about how to become involved with the eDinos Program.