The Earthquake Dinosaurs site is produced by Dr. Tim Fedak, a vertebrate palaeontologist that studies the Triassic and Jurassic fossils found along the shores of the Bay of Fundy.  Dr. Fedak is the Director of the Fundy Geological Museum, in Parrsboro, Nova Scotia.

Why Earthquakes?  The dinosaurs and other fossils found along the northern shore of the Minas Basin represent a geological history of massive earthquakes and global change.  At the end of the Triassic Period, 201.5 million years ago, the surface of the earth erupted. Magma flooded to the surface from below as the supercontinent Pangaea began to rip apart.

The Earthquake Dinosaurs website follows active research projects, which include field work to document and collect new fossil specimens along the shores of the Bay of Fundy. Some field work includes larger teams that include students and volunteers.  If you are interested in learning more about participating in a field research experience, contact us to learn more about our field research program. 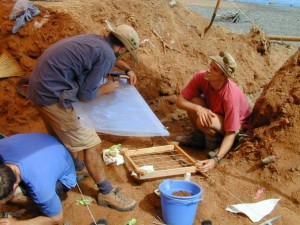 The Earthquake Dinosaurs projects also include the use of 3D digital scanning technology to create high-resolution 3D models of the eroding shoreline and fossils being studied. Photogrammetry and 3D animation software are used to develop new visual analysis of coastal shorelines and the fossils. These 3D models provide new ways to visualize and study the complex faults present in the Bay of Fundy region.

Scientists leading this project are members of the Society of Vertebrate Paleontology and all work done here is in accordance with SVP ethics and guidelines. Anyone conducting field research in Nova Scotia requires an a permit from Special Places Protection Office.

Funding for projects described in the Earthquake Dinosaurs website has been supported by: